A milestone for salmon recovery in Hood Canal

In the estuary flats of Lilliwaup Creek, a long leg of the journey to bring salmon back from the brink of extinction has come to a happy end. Last February, a generation of hatchery-born Hood Canal Summer Chum was released into the creek for what scientists hope is the last time.

The success of Long Live the Kings’ conservation hatchery program to boost summer chum runs on Lilliwaup Creek and the Hamma Hamma River is a bright spot in the story of salmon recovery. On the West Coast, 28 stocks have been added to the federal threatened and endangered species list in Washington, Oregon and California since the early 1990s. None have yet been declared fully recovered. “When I started there were hardly any fish, and it was very difficult to find even five pairs. I was out every day for a month in a drysuit looking for fish, looking behind every rock in the river,” said Rick Endicott, Facility Manager for the Lilliwaup Field Station run by Long Live the Kings, a conservation and research organization.

Only 70 chum made it back to Lilliwaup Creek in 1993, when Endicott and state fisheries managers first started capturing returning fish, harvesting their eggs, and releasing salmon at the fry stage, when they would naturally emerge from gravel beds and head for the saltwater of Hood Canal.

Today, the 1/4 mile stretch of brackish water between Hood Canal and Lilliwaup Falls boasts spawning clusters that rival similar-sized streams in Alaska, the world’s bread basket of wild salmon. LLTK has released about 150,000 chum salmon fry each year into Lilliwaup Creek since 1993. Today, between 1,500 and 3,000 chum return to spawn. Over half are born in the wild, a sign that hatchery rearing is no longer needed. LLTK stopped aiding the Hamma Hamma River population when it reached a similar milestone in 2009. Now, nearly 5,000 summer chum spawn each year.

Those runs are part of the larger Hood Canal Summer Chum population, which joins Snake River Fall Chinook and Oregon Coastal Coho as one of the only three populations of salmon on a path to recovery, and, one day, delisting and removal from America’s Endangered Species Act list.

For Tribal fishermen and anglers, the rebound of chum means more opportunity in the future to catch not just chum, but also prized for their flavor chinook and coho salmon. Because the three species mix in the waters of Hood Canal and its feeder rivers and streams, managers have curtailed fishing on all three species to minimize incidental catch of chum by fishermen targeting chinook and coho.

The recovery of chum and other salmon species depends on a combination of actions including innovative science, careful harvest management, and habitat restoration. On more than a dozen salmon streams that flow into Hood Canal, local leaders and volunteers have been building healthy habitat one tree and one log at a time. Bankside forests regulate flows, tempering flood and drought damage. Woody debris builds in-river structures where fish can rest, avoid predators and find food.

“For the people who live there it’s been a huge community effort doing different kinds of restoration. And there have been limits on fishing,” said Scott Brewer, Executive Director of the Hood Canal Coordinating Council. “Unlike many (places) in Puget Sound, recovery activities seem to be working, but you have to keep at it. We need to support remaining actions necessary to get them across the finish line.”

“It’s been very uplifting being part of something that’s working and for lasting change, said Joy Lee Waltermire, a biologist and hatchery manager with LLTK. “When I started I thought my goal was to put myself out of a job. Now I want to do this for more than summer chum.”

Summer chum also returned to Union Creek in record numbers, rewarding countless hours of sweat equity invested by hundreds of restoration volunteers led by groups like the Hood Canal Salmon Enhancement Group. In other watersheds on the Kitsap Peninsula side of Hood Canal, however, salmon recovery has a long road ahead. No summer chum are showing up yet in the Dewatto River or Big Beef Creek.

The optimism of science, policy and community leaders is tempered by caution that it’s too early to declare the job done. “As much as everyone here would love to see summer chum fully recovered, we want to wait for a few years before anyone talks about delisting so we make sure (the run) is healthy and ready to roll,” said Paul McCollum, Director of Natural Resources for the Port Gamble S’Klallam Tribe.

Beyond the reach of local salmon recovery heroes, the intensifying impacts of climate change present new and formidable challenges. Scientists warn a warming ocean will likely mean more frequent and extreme high-temperature cycles, like the recurring El Nino weather pattern responsible for atmospheric rivers that drive windstorms and flooding. And that means lean times for salmon as the productivity of their prey, like herring and krill, falls due to warmer water in the Pacific Ocean.

Scientists and fisheries’ managers know a lot about what salmon need to survive and thrive in freshwater environments: the rivers, estuaries and streams where they spawn, feed and grow. We have much to learn about what affects salmon survival in the marine environment of Puget Sound and the open ocean.

LLTK is leading research in collaboration with tribal, federal, state, and independent researchers to find out why salmon are suffering high-mortality in Puget Sound. Study results, and proposed actions to improve marine survival, are expected in 2019. The study is likely to recommend modifications to Hood Canal Bridge, a known chokepoint where predators wait for salmon.

As 4 to 6 inch juveniles, chum salmon migrate out of Hood Canal, under the bridge, and through the Strait of Juan de Fuca before heading north to the Gulf of Alaska. In the ocean, they will feed and grow for 2-3 years, reaching about two feet in length and weighing 8-10 pounds before returning to their birth waters to spawn the next generation of fish.

The legendary life-cycle of salmon, which demands extreme endurance and a sharp homing instinct that scientists still don’t fully understand, has fascinated humans for millennia. Salmon have a remarkable ability to survive and adapt. Over the eons, these resilient fish have bounced back from calamities like earthquake-driven landslides choking off access to rivers and spawning grounds.

For people doing the hard work of salmon recovery, patience and persistence do pay off. About 15,000 fry, hatched from eggs collected from only five adults, were released into Lilliwaup Creek in 1993. Eight salmon generations later, thousands return. “It’s remarkable how quickly they’ve recovered,” said Endicott. 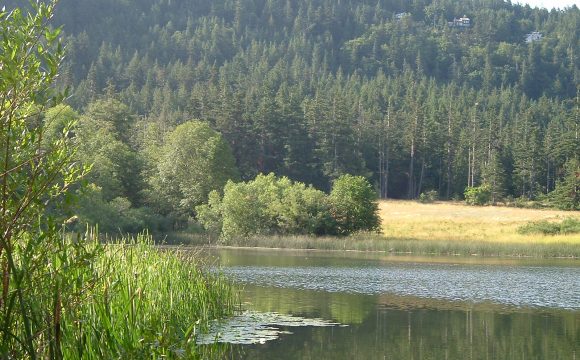 A History of Thinking Big